RegexBuddy makes it easy to generate source code snippets for all of the world’s most popular programming languages. Each language template implements a comprehensive set of functions, or things that you can do with your regular expression in the selected programming language.

If the provided functions don’t match your coding style, you can easily edit the template for the current language by clicking the Edit button on the toolbar on the Use panel. You can edit the template for any language by clicking the Edit button in the application selection window. You can edit or delete the provided functions, and add as many new functions as you like.

The RegexBuddy Source Code Template Editor appears when you click the Edit button on the toolbar on the Use panel. To start with a fresh template, click the New button. To open an existing template, click the Open button and select the template from the drop-down list. Click the Save button to save your modified template, overwriting the existing template. Click the Save As button to save the template under a new name, so both the original and the modified template will be available.

Templates that ship with RegexBuddy are stored in the same folder as RegexBuddy itself. The default installation folder is “C:\Program Files\JGsoft\RegexBuddy4”. Templates that you save are always saved under the “Application Data\RegexBuddy 4” folder under your Windows user profile. If two templates with the same file name exist in both folders, only the template in your user folder is used. The effect is that if you open a template included with RegexBuddy and save it with the same name, only the modified template is available in RegexBuddy, but the original template remains available on disk. When you install new versions of RegexBuddy that ship with updated templates, the installer overwrites the templates in RegexBuddy’s installation folder and leaves the modified templates in your user folder alone. RegexBuddy keeps on using your customized templates.

On the General tab in the template editor, you should set the general properties of the language you’re creating a template for. You should also enter your contact details, in case you want to share your template on RegexBuddy’s user forums.

Language: Enter the name of the programming language the template is for. You can specify a more descriptive purpose if you’re creating an alternative template for a language that already has a template. This name will appear in the Language drop-down list on the Use panel.

String style: Select the kind of string or operator that the language uses to specify literal regular expressions in source code. The %REGEX% and %REPLACEMENT% placeholders insert the regular expression and replacement text into the generated source code snippet after formatting it using the string style you select here. This way, RegexBuddy automatically takes care of placing quotes around the string and escaping quotes and backslashes in the regex, or whatever the selected string style requires. The available string styles are the same ones available via the Copy and Paste buttons on RegexBuddy’s main toolbar.

On the Modes tab in the template editor, you need to specify the code that RegexBuddy needs to use to make sure your code snippet uses the same matching modes as RegexBuddy itself. The labels on the Modes tab correspond with the choices in the drop-down lists on RegexBuddy’s toolbar.

What you specify on the Modes tab is not automatically inserted into the source code snippets. Rather, the code you specify for each mode is used to build up placeholders such as %MODELIST%, %CASELESS%, or %FREESPACING%. You can find the full list of placeholders in the Function section below.

Code to make a list of modes: If you want to use the %MODELIST% placeholder in your code snippets to insert all modes together in one spot, you can specify how RegexBuddy should build that list. If you leave all the boxes blank and the checkbox off, RegexBuddy will simply concatenate all the modes without any spacing between them. In the “begin list” and “end list” boxes you can specify which code, if any, RegexBuddy should place at the start or the end of the list. The begin and end code is only used if the list contains at least one mode. In the “delimit modes” box, you can type the characters that RegexBuddy should place between two modes. If you want the delimiter to include a line break, turn on the line break checkbox. The delimiter is only used if the list contains two or more modes. In the “empty list substitute” box you can type the code that %MODELIST% should insert when all modes are set to their defaults (i.e. all the relevant code to turn modes on and off is blank).

The Functions tab is where the real action is. Here, you’ll define all the functions that appear in the Functions drop-down list on the Use panel when your template is selected.

The Match, Replace and Split checkboxes determine whether the function is available on the Use panel when these modes are active. You’ll need to select at least one of them. Since a comprehensive template will have a lot of functions, you can reduce clutter by restricting search functions to the Match mode, search-and-replace functions to the Replace mode, and split functions to Split mode, where they’re relevant.

There’s a difference between checking whether a regular expression matches part of a string, versus checking if it matches the whole string. Some programming languages have separate routines for these two tasks. Other languages don’t have a special method to check whether a regex matches a string entirely. For those languages, you can create a function that checks if a regex matches a string entirely by turning on the options to prepend and append an anchor. RegexBuddy automatically uses the anchors appropriate for your language’s regular expression flavor.

Finally, you’ll need to type in the actual code snippet. The box in the lower right corner is where you type in your snippet using placeholders. RegexBuddy shows a preview of the source code it generates in the lower left corner. The preview uses the regular expression and options you used in RegexBuddy before opening the source code template editor.

You can insert placeholders by typing them in, or by clicking the Placeholders button and selecting one from the list. The following placeholders are available:

The regex and replacement tree functions have dedicated placeholders that pretty much generate the entire function. See the list of regex tree functions for more details.

You can also use conditionals to include certain code in your snippet only under certain circumstances. This is particularly useful to create snippets that call functions with optional parameters. For example, typing “%IFSPLITLIMIT%, %SPLITLIMIT%%ENDIFSPLITLIMIT%” will insert a comma, space and the split limit only when the split limit is not blank. The following conditionals are available: 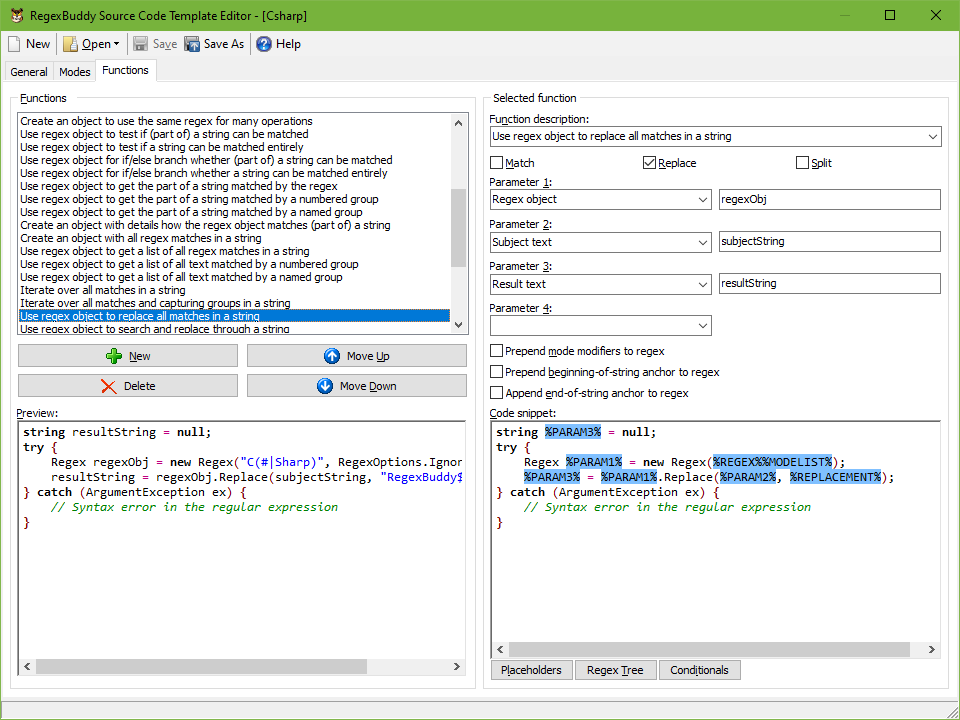