Compare a Regex Between Multiple (Versions of) Applications

RegexBuddy has the unique ability to emulate the features and limitations of all the popular tools and languages for working with regular expressions, including many different versions of the same applications and programming languages. Many of the differences that RegexBuddy is aware of are quite subtle. You wouldn’t necessarily discover them just by testing your regular expressions in your actual applications, because many subtle differences only reveal themselves with specific test subjects. Therefore, you should always check RegexBuddy’s analysis on the Create panel, so you’ll know what to test for.

With RegexBuddy you can easily deal with this. RegexBuddy can instantly compare your regular expressions between any number of applications.

After you clicking OK, RegexBuddy will immediately compare your regular expression (and replacement text, if any) among all the selected applications. Parts of the regular expression that are handled in the same way by all applications are added normally to the regex tree with their usual icons. In the screen shot below, that includes the comments and \p{Ll}. If certain parts of the expression are handled differently, the regex tree will show multiple

nodes for those parts. There will be one node for each unique interpretation of that part of the regex, listing all the applications that follow that interpretation. The screen shot shows that Perl 5.12 and prior handled the “lowercase letter” and “uppercase letter” Unicode categories inconsistently in case insensitive regexes.

icon. These nodes restrict the comparison of their part of the regex to certain applications. If you click on such a node, RegexBuddy selects the node’s part of the regular expression. In the screen shot, you can see that Perl 5.8 does not support named capture, but that later versions do. The nodes below the Perl 5.14–5.16∥Perl 5.10∥Perl 5.12 group node node are added with their usual icons because these versions of Perl handle the named capturing group and its content in exactly the same way. Double-clicking on regex tree nodes does not have any effect if the regex tree indicates any differences.

If the entire regular expression or replacement text is handled in the same way by all applications you’ve chosen to compare, then

nodes at the top of the regex tree or replacement tree will tell you so. Then double-clicking tree nodes then works as usual.

If there are too many incompatibilities between the applications that your regex needs to work with, then you may need to create multiple regular expressions. RegexBuddy’s Convert panel can help you with that. 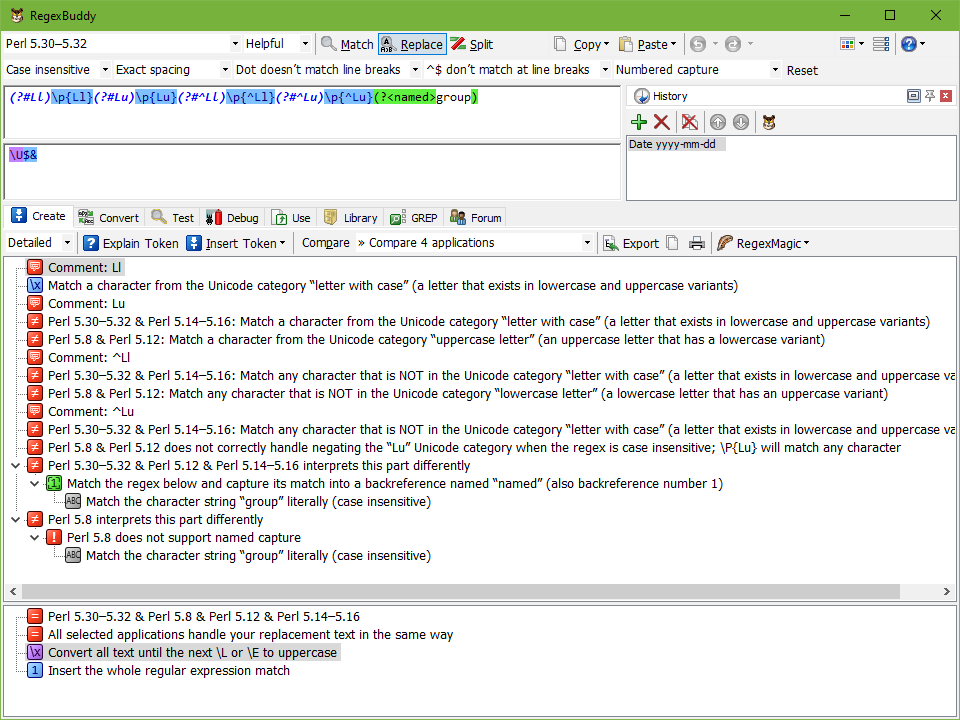